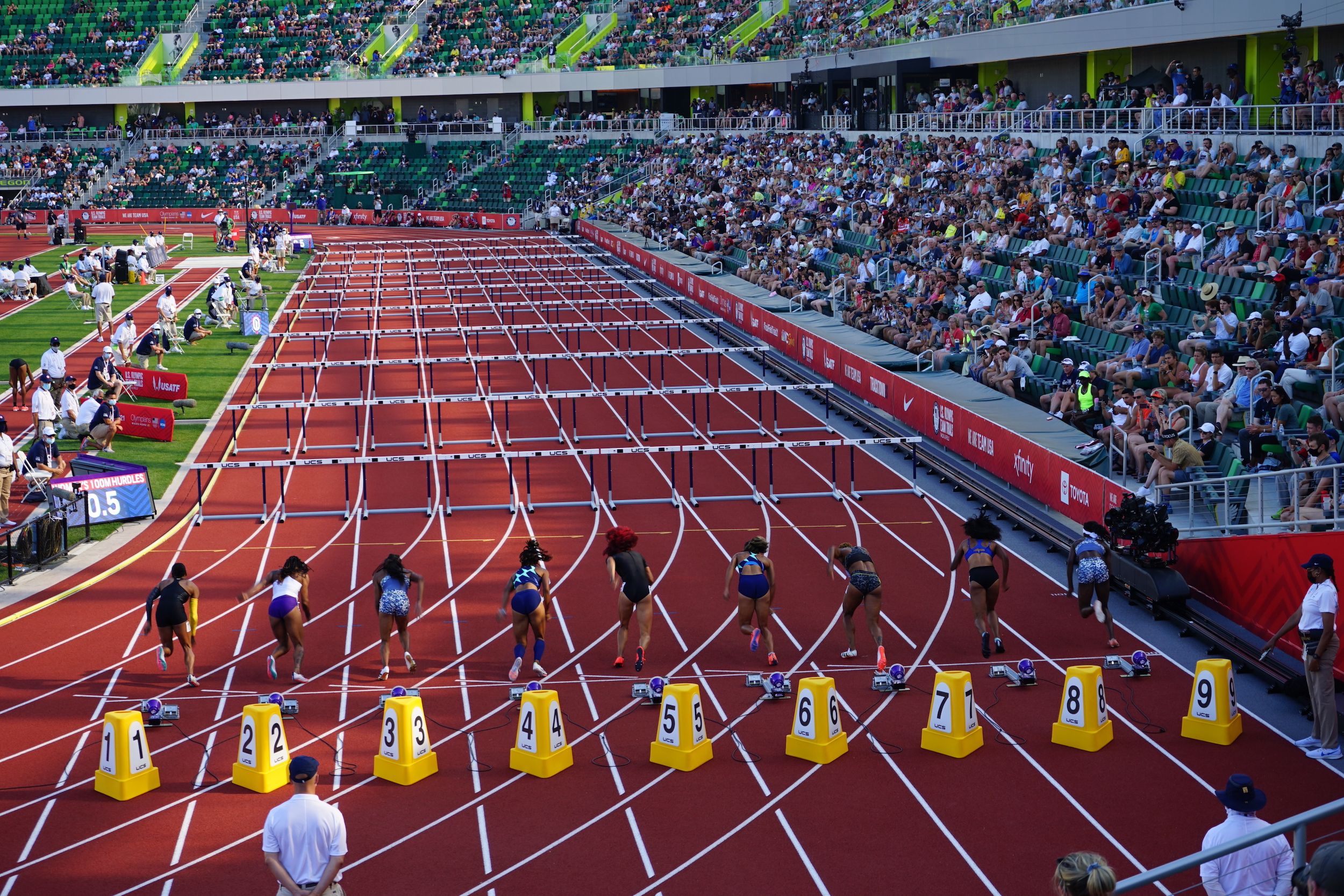 EUGENE, ORGEON – The USA Track & Field Foundation is pleased to announce that 52 Foundation grantees will be making the trip to Tokyo, Japan later this month to represent Team USA at the upcoming Olympic Summer Games. The U.S. Olympic Team Trials were held last week at the brand-new Hayward Field in Eugene, Oregon. The Team Trials were originally scheduled last year at this same time but due to the Covid pandemic they were postponed. The athletes competing had to endure extreme conditions on their road to Tokyo with temperatures above 100 degrees most days. The competition was an immense success for Team USA, as well as Foundation Grantees, with two World Records and many American and Meet Records set throughout the week.

“It was awesome to spend time with the other Foundation directors at the amazing Hayward Field watching some top-notch performances from many of our grantees. Good luck to them in Tokyo and I am already looking forward to the World Championships next summer in Eugene,” stated USATF Foundation Director Andy Mantel.

Perhaps the most notable performance of the week was from Ryan Crouser, a Foundation Grantee since 2016, who broke the 31-year-old World Record from Randy Barnes in the Shot Put with a throw of 23.37 meters. Long-time Foundation Grantees Deanna Price and Rudy Winkler both set American records with wins in the Hammer Throw with marks of 80.31 meters and 82.71 meters, respectively. The rest of the throwing events were highlighted by new Meet Records and wins from Jessica Ramsey in the Women’s Shot Put, and Valarie Allman in the Women’s Discus Throw.

Other Foundation grantees to qualify from the throwing events were Daniel Haugh (2nd) and Alex Young (3rd) in the Hammer Throw. Mason Finley (1st), Reggie Jagers (2nd), Sam Mattis (3rd) in the Men’s Discus Throw. Joining Crouser to round off the Shot Put competition were excellent throws from Joe Kovacs (2nd) and Payton Otterdahl (3rd). Grantees Curtis Thompson (1st) and Riley Dolezal (3rd) both finished in a qualifying position, but will have to wait until Friday to see if they make it through to the Olympics based upon the new World Rankings system as neither of them have the Olympic Standard. The following athletes round out the throwing events on the female side with Raven Saunders (2nd) in the Women’s Shot Put, and Brooke Andersen (2nd) in the Women’s Hammer Throw.

The Field Events were led by Meet Records in the Women’s Pole Vault from Katie Nageotte with a vault of 4.95 meters. Long time Foundation Grantee Sandi Morris captured a 3rd place finish in the same event. In the Women’s Triple Jump, Keturah Orji jumped a Meet Record of 14.52 meters to conclude the Triple Jump competition while Tori Franklin captured a 2nd place finish in the same event.

The Running Events were highlighted by now 3-time Olympian Emma Coburn with a Meet Record of 9:09.41 in the Women’s Steeplechase. Emily Sisson also came out with a dominating performance in the heat in the Women’s 10000m to set a new Meet Record and punch her ticket to Tokyo.

The Tokyo Olympics will be held from July 23rd – August 8th and while our Foundation Directors won’t be able to attend in person, our donors and Directors will look on with anticipation from home.