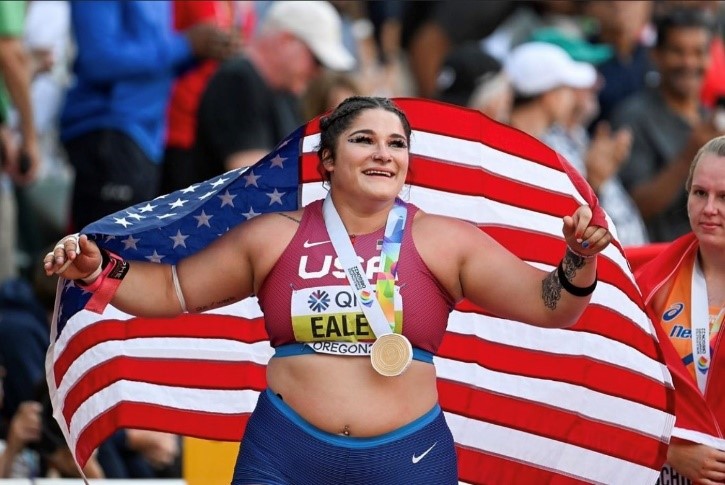 EUGENE, OREGON – The 2022 World Athletics Championships have come to a close, culminating with the USA taking home a record-breaking total of 33 medals (28 individual, 5 relays) — greater than any other country had earned in the history of the World Championships. The USATF Foundation is proud to share that 19 of the individual medals were earned by 2022 Stephen A. Schwarzman grantees.  Nine additional medals were achieved through participation on all the medal winning relays.  24 different Stephen A. Schwarzman grant award winners received medals.

Our newly-awarded 2022 Stephen A. Schwarzman grantees received 6 gold, 6 silver, and 7 bronze medals as highlighted below:

In the women’s throws, Chase Ealey won gold with her first shot put attempt of 20.49m, Brooke Andersen threw 78.96m to take gold in the hammer throw with Janee Kassanavoid capping a stunning U.S. performance with a bronze.

In other field events, Katie Nageotte and Sandi Morris took first and second place, respectively in the pole vault with each of them clearing 4.85m.  On the men’s side, Chris Nilsen struck a silver medal in the pole vault finishing at 5.94m.  Zachary Ziemek took bronze in the decathlon with a PB of 8,676 points, which is the first USA medal in that event since Ashton Eaton in 2015.  Finally, achieving bronze medals in the discus and triple jump Valarie Allman and Tori Franklin became the first U.S. women ever to achieve World Championship medals in these events.

Noteworthy standouts on the track included Fred Kerley and Marvin Bracy-Williams who led a U.S. men’s sweep in the 100m. Grant Holloway, the reigning 110m hurdles World Champion successfully defended his title in 13.03, leading a one two sweep with Trey Cunningham from Florida State taking silver.   Kenny Bednarek ran 19.77 for a silver medal in the 200m.  Dalilah Muhammad, the former world record holder, finished with a bronze medal in the 400m hurdles and Trevor Bassitt from Ashland College achieved the same on the men’s side with a new PB.