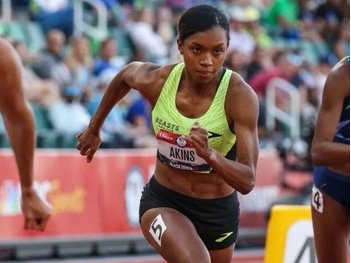 PITTSBURGH – With the 2022 World Championships in Eugene around the corner, USATF Foundation Director Robert Hill has stepped up to support three elite athletes through the Foundation’s Adopt an Athlete program.  Sam Mattis, Nia Akins, and Vincent Ciattei are each recipients of this generosity and will all receive a $4,000 grant.  “Robert has shown tremendous leadership since joining our Foundation Board and this gift is another example of his dedication to assisting our Olympic hopefuls,” stated Foundation CEO Tom Jackovic.

The USATF Foundation’s Adopt an Athlete program allows donors to give direct financial support to a specific event discipline or athlete.  As these professional athletes dedicate their days to becoming an Olympic or World Champion, they often struggle to find ways to make ends meet.  The Adopt an Athlete grants provide relief of monthly expenses and allow athletes to focus on training and recovery in order to reach their true potential.

Sam Mattis has achieved much through his discus career. After starting with a 77′ foot throw in 8th grade, Sam went on to win the NJ Meet of Champions three times, New Balance Nationals twice, Penn Relays once, and break the New Jersey state record. At the University of Pennsylvania, he won Ivy League championships four years in a row, and was named USTFCCCA Male Scholar Athlete of the Year on his way to winning the NCAA title in 2015. After graduating, Sam has managed to achieve three consecutive top-3 finishes at USATF Nationals, including a victory at the 2019 event. In 2021, Sam qualified for the Tokyo Olympics, made the Olympic Final, and ultimately finished in 8th place.

Fellow University of Pennsylvania alumnus, Nia Akins, was the runner-up in the 800m for both the indoor and outdoor NCAA National Championships in 2019.  Before her senior season was unexpectedly halted due the pandemic, Akins ran 2:00.71 for the indoor 800m which was just 0.02 seconds away from the collegiate record.  Nia Akins is not only making action on the track but in the music world as well.  Her first single, “Smoke” was released this year on all platforms which details the little clouds of fear and doubt with her career and how she takes those feelings and transforms them into inspiration.

Middle distance runner Vincent Ciattei, is a graduate of Virginia Tech.  His senior year in 2018 he earned silver for the NCAA Indoor National Championships in the mile, setting a new school record and gold in the distance medley relay in which he ran the 1,200m leg.  He also captured a silver medal in the 1,500m in 2018 for the NCAA Outdoor National Championships.  At the Olympic Trials he placed 10th in the finals of the 1,500m which has only given him more determination when preparing for the Paris Olympics.  “I’m very grateful for the support of USATF Foundation and Robert Hill. The financial support from the grant is of course very important, but the feeling that my hard work over the years is now being recognized is just as meaningful,” explained Vincent Ciattei.  “To receive this awesome news in the middle of a tough altitude training camp has provided extra motivation to display some exciting performances this spring and to keep striving towards the World Athletics Championships in my home of Eugene this summer!”