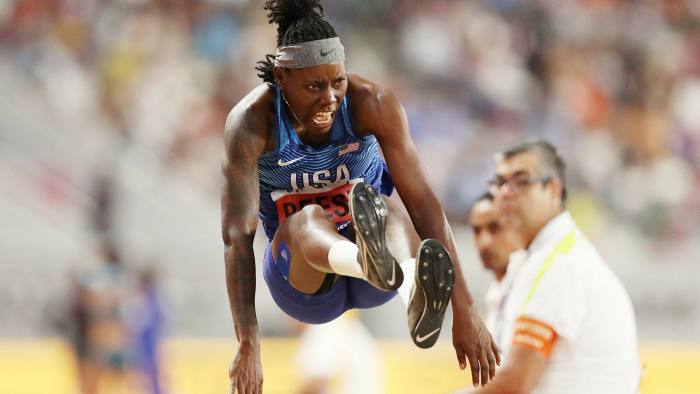 Brittney Reese, an Olympic gold and silver medalist in the women’s long jump, is hoping to make her fourth US team this week when she competes for a spot on the American delegation to Tokyo.

Financing for her preparations to get there has largely come from an unlikely source: Blackstone founder Stephen Schwarzman.

“He’s the only person I know who has been that generous, that I’ve met,” said Reese, 34. Last summer, she was one of 25 Olympic hopefuls selected to receive a grant of $25,000 made possible by Schwarzman’s largesse, a sum she says constitutes her only guaranteed income this year.

Since 2013, the private equity titan has become the largest individual donor to the USA Track & Field Foundation, committing $12m to athletes training for the games. While a small sum for a man whose net worth is estimated at $29bn, his standing as the primary backer of athletes such as Reese is illustrative of the lack of financial resources available to Olympians even in wealthy countries such as the US.

“A lot of these athletes really live hand to mouth, and this is hard to believe, they have to choose between eating and where they can live,” said Schwarzman. Unlike some US professional sport leagues, which have guaranteed minimum salaries for players protected by collective bargaining agreements, Olympic hopefuls are largely independent contractors dependent on sponsorships or donations.

“I think the US [Olympic system] is somewhat disadvantaged by virtue of our structure,” Schwarzman said, whereby the sports and athletes who receive funding are largely at the whim of “how popular a sport is and whether it can find donors”.

Reese, like many field athletes in particular, has a sponsorship contract with Nike, but this year will earn money only if she achieves certain performance benchmarks, such as earning a spot on the team to Tokyo through placement at the US Olympic Trials taking place this week in Eugene, Oregon.

“We don’t get the recognition a sprinter would get, that’s a USA problem,” said Reese.

Shoe companies traditionally form the bulk of an aspiring Olympian’s income, though changes across the industry have disrupted the market for endorsements. Nike, for its part, is in the midst of a protracted restructuring, and Under Armour has drastically pared back its sports marketing spending.

The Covid-19 pandemic only exacerbated such shortfalls. World Athletics, the global governing body for the sport, relied on private donations to fund need-based stipends of $3,000 for nearly 200 athletes worldwide last year. This week, the group said it will allocate an additional $1m in prize money to victors at the next two world championships — funds it said it will scrape from fines paid by the Russian Athletics Federation for anti-doping violations.

Schwarzman was a high school sprinter growing up outside Philadelphia, specializing in 220 and 440 yard track races, and as an undergraduate at Yale, he was classmates with the eventual 1972 Olympic marathon champion Frank Shorter. “We were in English class together,” he said.

But it was not until 2012 that he became financially involved in the sport. At the London Olympics that year, he watched US middle distance runner Morgan Uceny trip and fall on the penultimate lap of the 1500m championship — an experience he described as “crushing” and motivated him to reach out to her through mutual contacts.

“I didn’t know who he was at the time” said Uceny, who has since retired from the sport. Schwarzman said it was their meeting, shortly after the London games, that motivated his donations. He has since invited grant recipients to Blackstone headquarters each year for an annual luncheon.

He concedes that not all of them are familiar with the world of private equity. “They’ll ask me to describe what I do, ask how things work,” he said.

Despite his personal commitments to track and field, Schwarzman said that Blackstone is not looking to join the fray of other private equity firms rushing into sports investments, such as CVC Capital Partners and Dyal Capital.

“We have no focus on sports as a business,” he said. “It’s not something we’re actively looking at”.

** Reposted from the Financial Times – written by Sara Germano